If the Universe Could Just Stop..That'd be Great.

The phone call every parent with a child behind the wheel fears came yesterday morning. I was in the shower getting ready to go to work when my phone rang with KC's distinct ringtone. It's that really annoying one that yells "Your son is calling. Pick up the phone now." Given that it wasn't even 7 am yet, my heart dropped and I got out of the shower without even finishing up. I answered and there was only silence from his end. I hung up and tried calling him back. While my call was in progress, his fiance, Allie, called me. I hung up the call I was making and answered her call. I don't remember the exact order of the words but they terrified me.

KC was in a bad accident.

The car is totaled.

He told me his face and hand hurt. He was so upset about his car, but I just needed to know he was okay. When he told me he had blacked out after impact, I told him he needed to go the hospital to get checked out instead of just having Allie pick him up like he wanted. He didn't argue too much and ended up in the back of the ambulance.

I woke up Gage and told him what had happened. We left the house within a few short minutes and started off toward the hospital where the ambulance would be dropping him off for tests and treatment. He ended up having a concussion, a broken pinky finger, and some bumps and bruises here and there. The Camaro had done its job and protected him during the accident.

But it is totaled. We have no doubt. 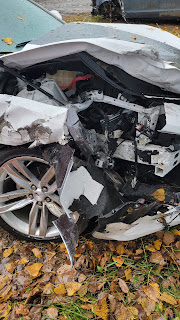 When we got to the hospital, he told us what he could remember. He had been on his way to work, turning at a corner he had turned at many times before, and then he was waking up behind a deployed airbag. He thinks it either knocked him silly or it plain knocked him out when it went off. He remembers the truck in front of him turning and then nothing. He doesn't recall seeing headlights or another vehicle. He had no idea where she had come from or even what direction she had been traveling.

He was heartsick about his car. He told us he had cried at the site of the accident.

That may sound ridiculous or extreme to some people but I understood. This wasn't just a pretty car, it was the last thing he had ever received from his dad. A gift from beyond the grave. When Ken passed away, he gave me strict instructions on a few things and one of them was that I was to buy KC a safe and dependable car with some of the life insurance money I would be receiving. So, a few months after his dad had passed away, we went used car shopping and he found this 50th Anniversary edition Camaro. It was in the price range Ken had set. It was something KC felt he'd keep and pass down to his own son. It was a car and a keepsake. 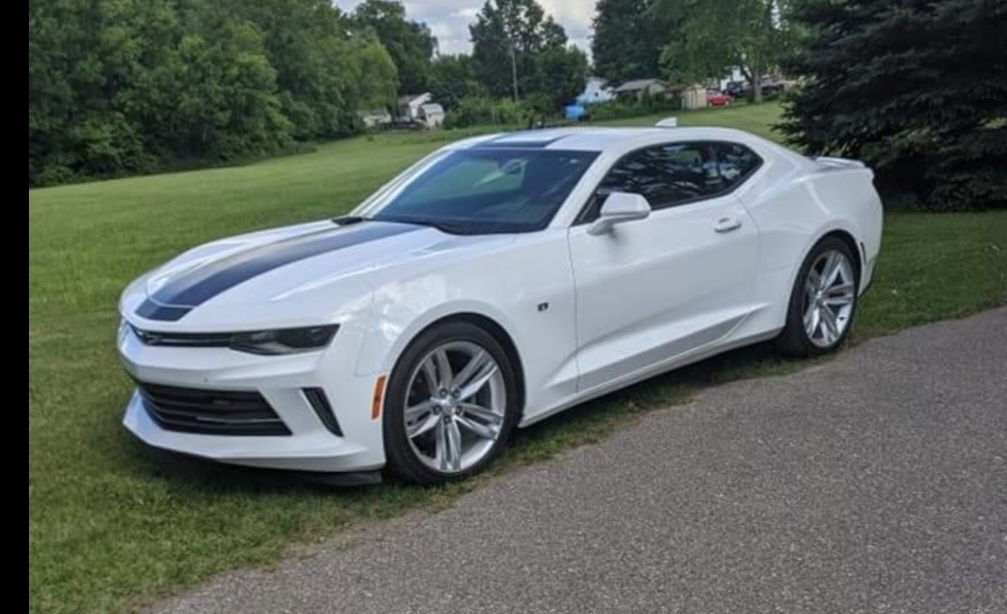 The keepsake is destroyed. The last gift was ruined. Of course, KC was understandably heartbroken.

Worse, he thinks he lost his dad's wedding ring in the accident. Two sentimental losses in one little accident.

My heart hurts for him over those losses but I am beyond grateful the reinforced steel cockpit protected him from what I think was very close to being a head-on collision. It may not have looked it, but that car was safe. It did its job and saved my boy from serious injury or worse. A broken pinky, loss of wages, and anxiety over making ends meet during the insurance claim are small prices to pay. He is alive. That's all that really matters to this mama. We'll figure the rest of it out. One way or another.

Popular posts from this blog

The Talk of Washington

June 03, 2008
I'm sure you've at least heard that Bush's former Press Secretary, Scott McClellan, has released a book on the Bush Administration. I think I first heard of it on Eric & Carson , a local radio show. The next morning it was on the news, who emphasized again and again that McClellan's criticism has been met with surprise and disappointment by White House officials. Really? Say it isn't so! Now, I haven't read the book. I haven't seen more than a couple of quotes and read more than a paragraph or two of the actual text using Amazon's "Look Inside" feature. Um. Not sure what all the buzz is about. I didn't see anything all that shocking. In fact, I couldn't even find anything remotely interesting. Maybe I'm burned out on political propaganda. Maybe I'm not discerning enough. However, I did find one interesting quote I'd like to share: "I want to quote his defenders, but he doesn't have any," Peggy Noonan
2 comments
Read more

It Should Be Our 28th Wedding Anniversary

October 15, 2022
I had to do the math twice. Probably because I'm really bad at math. Today should have been our 28th wedding anniversary. We only made it to 26, which is so impressive when you consider how many marriages end in divorce.  So, because I have no doubt in my mind we would have been married still today had cancer not taken him, I want to honor our special day. So, here's a Happy Should Have Been Anniversary to my hubby in heaven.  Today, as I recognize what should have been and think about what was, I figured I'd share not only some lovely pictures from our wedding day but I'd explain how this widow plans to move through October 15, 2022.  In just a little bit, I'm joining another Millington widow at a Widow's Luncheon, which is being hosted by the Amish Church in Millington. I'm a bit nervous, to be honest, because I don't know what to expect. On my best days, I consider mys
5 comments
Read more

February 01, 2022
It's been a little over eight months now since I lost my husband to pancreatic cancer. Overall, I think I'm doing fairly well.  The house is still standing. I am still standing. Those both seem like significant wins.  I get through most days now without hardly a tear but there are those other days, days when I find myself unexpectedly crying.  Maybe it's a song on the radio or a touching scene on the screen setting off memories or reminding me of dreams unfulfilled. I cry then. It's impossible to hold back the grief, the self-pity, the wishes for more, or the distress at what happened in those last few weeks.    But for the most part, I think I am functioning fairly well. I am keeping my shit together. I am getting stuff done. I am taking care of what needs to be taken care of, whether that's the house, the bills, the car, the camper, the day job, the kids, or the grandbaby.  Every now and again I give myself permission to do nothing, though, because the loss of a p
Post a Comment
Read more 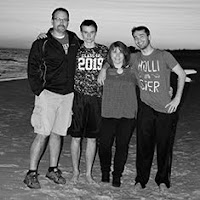